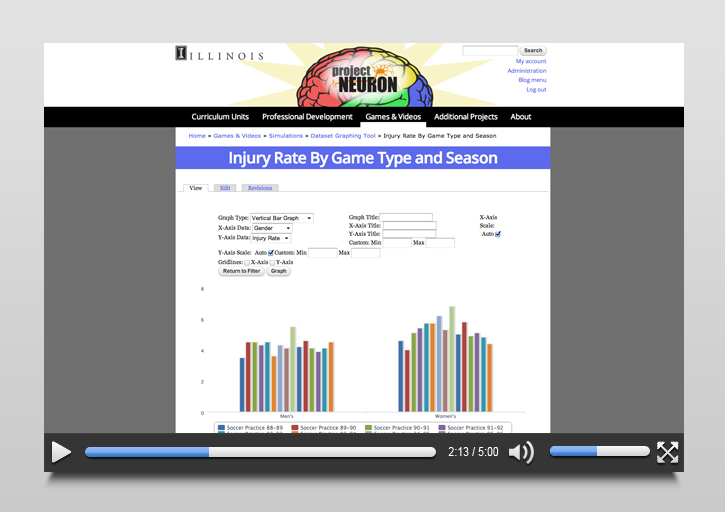 Traumatic brain injury (TBI) covers a wide range of injuries to the brain. Data on TBI is collected from many sources such as hospitals, sporting events, the military, and surveys sent out to individuals that have sustained a head injury. Choose a dataset below that interests you to begin exploring the data behind TBI.

The NCAA Injury Surveillance System (ISS) was first developed in 1982 to provide current and detailed injury statistics for college-level athletics. Currently data is collected yearly via an online system where trainers and coaches can submit information about their player's injuries. The information collected by the ISS is used by the both colleges and the NCAA when making decisions and creating new policies for a particular sport. The system is free and periodically the NCAA publishes a summary of their data for 15 men's and women's sports. The data included here is from the most recent summary report in 2004.

The NCAA ISS data is divided into three subsets, each exploring a different aspect of sports injury:

What is "data"? Data can be a set of facts, measurements, numbers, words, or any other piece of information that can be collected, categorized, or described. Data collection plays a critical role in the work of scientists and researchers, but once you have the data, what do you do with it?  How does a long list of data points become an answer to a question or the solution to a problem? The Dataset Graphing Tool is designed to explore some selected datasets and generate graphs to present data in a meaningful way.

This short instructional video demonstrates how to use the Dataset Graphing Tool. Watch the video and explore the data!

Part of the curriculum unit:
Why dread a bump on the head?